Showing posts from January, 2010
Show all

January 19, 2010
Apparently last night on his show, Jay Leno said something like this about this whole late night debacle: "Its just business..when you don't get the ratings they take you off the air." Really, Leno? You mean like your failing show? The one that has been cancelled because of its ratings? Hey Leno, remember when it took you 18 months to get your ratings to where the network wanted them? So you just crap all over Conan's dream because you can't face the facts that your out of date and ridiculously unfunny. I will never watch The Tonight Show again while Leno is hosting. He is not funny, irrelevant, and in my eyes, ridiculously not classy, for allowing this whole thing to happen becaues you can't realize that you should be wearing all denim every day "working" on your cars and eating unhealthy food. I'm ashamed that I know that much about him.
Post a Comment
Read more

January 19, 2010
When I go to work, this might sound crazy, but I leave the TV on for the dog. I usually watch the Today show in the morning (mostly for the weather). So when I get home, the TV is still on NBC. And about the time I get home, those entertainment non-news shows are on. So today when I got home, this "celebrity" Heidi Montag was on one of them. She was saying that she wasn't addicted to plastic surgery, she did this for her "music career" (although she refused to sing for the person interviewing her), and that she was a "strong Christian" and that God made her the way she was, but he also brought her plastic surgeon into the world and he could have put the man on this earth because he knew she was going to try to have a music career and want plastic surgery. All that after admitting she didn't like the way she looked before. First of all: God makes us all the way we are: Psalm 139:13-17- "For you created my inmost being; you knit me toge
Post a Comment
Read more 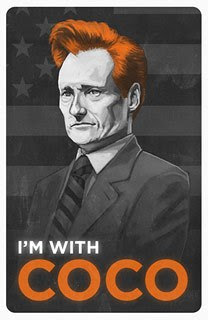 I have heard over the years (even Conan has said it) that Leno is a "class act." He might not be funny but he supposedly a "good guy." If he were such a great guy, he would bow out of this whole situation. I understand that he supposedly didn't want to leave the tonight show(he wanted to continue telling lame, unfunny jokes for years to come apparently), but the network decided to go another direction. Can you blame them? Now, its more about pleasing affiliates and new owners than anything else. Conan hasn't had a chance to really establish himself and his show (let alone settle in to his new home, no doubt)... and they're considering breaching the contract they signed years ago. I don't care where Conan is, wherever he is, whatever network- I'll watch him. I will never watch Leno again. I think this whole thing would be fairly easily fixed if he did bow out, and do the graceful, classy thing. He doesn't seem to be doing that. Which piss
Post a Comment
Read more

Conan, You are awesome. Please stay.

January 11, 2010
For those of you who were not aware... I love Conan. I have a freaking conan coffee mug from the NBC store I love him so much. My love for conan has been described as... unnatural.. obsessive... and so totally awesome. lol. The point is, I hope Conan Stays with the tonight show... if for no other reason than to make Leno stay with a lousy half hour show (which will most likely get cancelled), and stay under the tonight show title. I think conan deserves it. He's SOOO much funnier than Leno (when was the last time Leno was funny? oh, and headlines don't count, because he does nothing for those). Please Conan STAY ON THE TONIGHT SHOW! Show NBC who can really be successful! I will watch you no matter where you are, but I think that it would be a shame for you to not be the host of the Tonight Show. Don't let Leno continue to Dumb down humor for those who can't understand good humor.
Post a Comment
Read more

January 11, 2010
Yeah, I said it... Leno Sucks. He's not funny. If NBC knew anything about TV or culture, or FUNNY, they would give Leno the heave ho. I am PISSED that they're pushing Conan back To give Leno a half-hour long show. I will always be sure that my TV is NOT on NBC for that time, and still Record Conan (whether he's on FOX or NBC). I am boycotting Leno. Seriously, if Leno knows what's good for him he'll retire. I thought that's what he wanted anyway? LENO: You were funny 20 years ago, but your jokes are lame and NOT funny now. I will not watch your show and I will encourage anyone I know not to watch it. (I'm not dellusional enough to believe he would actually read by blog, just venting).
Post a Comment
Read more

January 08, 2010
Thanks to those of you who follow me.. lately postings have been few and far between, mostly because I was without internet at home for a while. Posting via Blackberry can be soo tedious. I was reading on google news today that Leno's new 10pm show is struggling. This does not surprise me. I don't find any of his jokes funny, I find them lame. The only funny things he does are headlines and jaywalking, and those don't really have anything to do with his jokes, they just show the stupidity of people in general. I also read something about him possibly going back to 11:30... wait.. he's struggling at one time, so NBC really things putting him at his old time will help? Hey, NBC, its not the timeslot. I think its time for Leno to retire from TV. Its long overdue. He does the same jokes night after night and they're not usually funny the first time. They said they would give Conan a choice whether he wants to go to another network. Apparently this is all spe
Post a Comment
Read more
More posts