Showing posts from December, 2007
Show all
December 25, 2007
Merry Christmas! I got a puppy for Christmas. When I am able, I will post pics!
2 comments
Read more
December 19, 2007
Has anyone seen the show "Clash of the Choirs?" I watched it last night, because I recorded it, thinking maybe it wouldn't completely suck. I was curious, and curiousity killed my cat. I watched it and wanted to vomit. Not only did the choirs suck- but watching people like Nick Lachey try to conduct made me want to crawl into a hole and die. They mostly had soloists and then everyone else in the "choir" was dancing around and doing "choreography" (and even that was shoddy). The soloists were sometimes dressed like hooches, and made me want to punch a baby. That's right, I said it. ALSO- one choir, "directed" by Patti Labelle, did a version of one of my favorite songs: "I'll Stand by You," By The Pretenders. OH MY WORD! Not only did they kill the song, but the soloist (see- I told you- soloists with choreographed crappy background singers) was FLAT for most of the song and sucked. Then, they would go to the "
3 comments
Read more
December 11, 2007 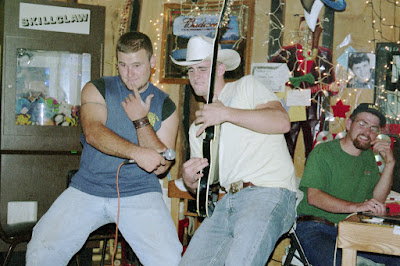 These are some random pics I thought I'd share: Jake (with mic) and Bryan rocking out to some Chris Ledoux at karaoke. I feel compelled to tell you there are indeed no strings on that guitar. He's pretending. Me and my friend Melinda, trying to look cute. The Pistons, doing their trademark ritual before the game.
1 comment
Read more
December 11, 2007
Update on my mom: The bone marrow transplant is on hold. They are too concerned that bleeding will be an issue to do the transplant. The irony: The transplant is supposed to remedy the bleeding problem. So, they are going to be doing chemo to hopefully get the blood disorder taken care of first. This is frustrating, since they made such a big deal out of the perfect match, and now they are saying that other things need to be done first. Nothing too exciting is happening in my life.
1 comment
Read more
More posts