Showing posts from February, 2007
Show all
February 28, 2007
So, not only is my mom in the hospital still.. but there's more. My sister's boyfriend broke up with her today. Two months after their son was born, he broke up with her. I saw this coming. He is an irresponsible alcoholic jerk, who tried to cheat on her with her friend, and it did not work. Ugh. Men, sometimes. I mean, I guess I should not lump him in with all of you, because not all of you are completely bad. I mean, I must say that about 90 percent of you are completely confusing (the other 10 percent are probably gay- and we understand those guys... a fat lotta good it does us). I guess I am able to relate to her... because I know what its like to be completely devastated by a guy. I mean the past few months have been completely miserable for me. I went from so amazed and surprised by a relationship that had formed to.. completely confused and devastated.. and in the dark. That last part is the worst. The in the dark part. You see, I can deal with things if
2 comments
Read more
February 28, 2007 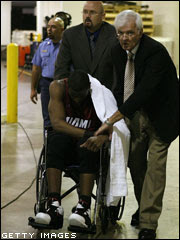 I recently logged in to my myspace account to see an advertisement for the new "Dwayne Wade Limited Edition T-Mobile Sidekick." How much is T-mobile kicking themself for that choice now that D Wade is most likely out for the season, with a possibility of having surgery on his shoulder. The first things that came to mind for this sidekick are: Does it constantly fall down and get hurt? For a "Star Player," he gets hurt more than I believe most young guys should. Maybe that says a lot about his game, but then again, maybe it says something about his conditioning. I want to know if this sidekick needs to constantly hurt itself and fall down and pretend people hit it to draw a foul. I want to know if this sidekick will allow me to recieve favoritism because of the name. I say this all in good fun, because lets face it, DWAYNE WADE IS HOT! And, he's just a great player. However, you should probalby stop hurting yourself so much. Shaq can't carry
Post a Comment
Read more
February 18, 2007
So I recently got to thinking about all the people I know who have just recently had babies or are pregnant. Can anyone even come close to wondering what the number is? Its 20. Twenty people who are procreating their brains out. Twenty people ... most of them haven't given birth yet. Only a few of them have already birthed their children.. and in one case she's both- she's given birth and is pregnant AGAIN. This is out of control. You people need to get a new hobby. Just kidding. I love you all. I'm just jealous. Other note: My mom (a.k.a. Freckle) is having surgery tomorrow. In the past week, they found a growth on her ovary and are taking the whole thing out. She had a partial hysterectomy a few years back but they left the one ovary.. now they're taking whatever is left in there. There's a history of these kind of problems in my family. Concerns me a little... but hopefully I have time to worry about that later. I've been pretty much freaki
4 comments
Read more
February 12, 2007 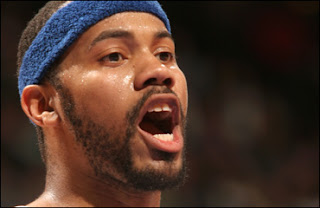 Despite the random picture of Rasheed, Yes the Pistons won tonight. They beat the Clippers and that makes seven wins in a row! They are now 11-2 since Chris Webber has come to 'The D' and heading into the All-Star break on a great run. I'm soooo stoked for the All-Star Game on Sunday... since Chauncey and Rip will both be playing in that game. I think that if my team keeps playing the way they have been they will be unstoppable for the rest of the season (Oh- the win tonight was by 18 POINTS). What else happened today? I got a random call from my friend Kip saying that he was at our friend's home (Dale and Sarah) and I should come over and hang out, because he has currently come upon some work and probably won't be able to hang tomorrow (our regular night to hang out). So I went over there, and he had this screech owl that he had found. Since he will be working over by Gun Lake, I guess he will be staying out there while he does the work. I'm assuming t
1 comment
Read more
February 07, 2007 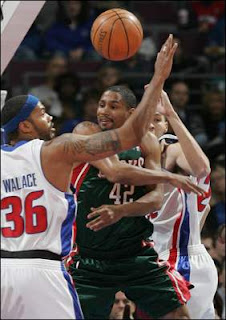 Here are some pics from the last three games (and the last three wins) of the Pistons. I would love to be in the middle of that Pistons sandwich! > That picture of Rasheed is HOT! Even with no headband! \/
2 comments
Read more
February 03, 2007 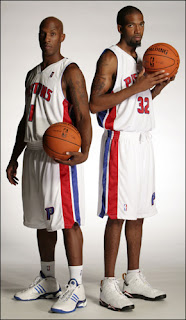 So, my team won last night against the Milwaukee Bucks, which wasn't really that big of a surprise, since the Bucks have the worst record in the central divison (the Pistons are on top of the Central. That is actually beside the point. The real news is that Chauncey (on the left) and Rip have both been named all stars this year. Now I am disappointed that more of the Pistons (like Sheed of course, and Tayshaun) aren't on there, but I'll get over it. Anyway, that's pretty much all I had to report. Nothing terribly exciting is going on. The Super Bowl is tomorrow, and I don't really care all that much. Oh well, I'll watch for the commercials anyway, but that's about it. I did have a job interview Thursday, and the job seems like a very good one, with benefits and all. I'm not sure if I will get it but here's to hoping. I'm just sick of being cooped up at home all the time. Oh well, I'm going to watch 'Father of the Bride' no
Post a Comment
Read more
More posts