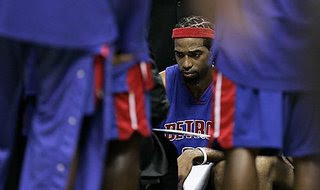 I love the fact that Rip looks like he's concentrating so hard. We all know Ben needs to practice his free throws. Sheed is hot. I love this block against LeBron. Tayshaun is awesome. This is a photo of a game near the end of the season, and I like to think that Sheed and Rip are laughing at how much they are beating the Pacers by. Normally I would never put a pic of Fatty up (Shaq) but it looks like he's trying to make fart noises in Ben's face. There's always room for Rasheed.
1 comment
Read more
June 30, 2006
I am so freaking everyone's freak! Okay, Maybe just Deven's. I think I might be going through a late rebellious stage or something... getting tattoos and what not. Not really... I guess everyone these days has tattoos.... and up until recently I thought I would continue being unique by NOT getting one.... but this Rasheed tattoo idea came to me, and its just too good to not do. Plus my brother will be getting a Matching Ben Wallace one (as long as he doesn't leave Detroit). On the same subject (the Pistons), I must say that I was sad to hear that they traded Mo Evans. He's a good young player and I love his heart and the way he plays the game. Unfortunately, there were not a lot of playing minutes in his near future in Detroit, and he apparently said he wanted to leave via his agent. I'm sorry that he will have to put up the arrogant piece of feces that is Kobe Bryant, but what can you do? Well, I'm not sure what my weekend has in store, since Zac called
Post a Comment
Read more
June 28, 2006
So, have I mentioned that I'm planning on getting a Rasheed Wallace Tattoo? Its going to be awesome. A guy I know does Tattoos and he told me he'd design it for me... its going to say "The Great Wallace of Detroit" and have his face either coming out of a wall or his face on a wall... and it is going to be awesome. I hope I'm not freaking anyone's freak too much. Hahaha. Work is boring. That's why I'm writing this. Anyway, I don't really have anything all that exciting to write about except that I can't do anything too exciting this weekend cuz I have a choir concert that is sure to be ball of laughs. Only not really. Well gotta work. Peace out.
1 comment
Read more
June 26, 2006 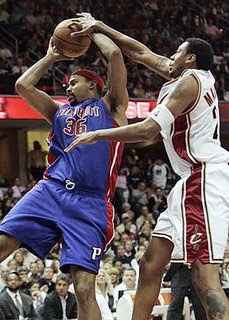 At the risk of "Freakin' Deven's Freak," I'm going to write about my life. I know that my life has been pretty crazy lately- and a lot of my friends are saying they are wanting to live vicariously through me (because about 97 % of my friends are married and boring).... okay, not boring, just married. Only about 47% of them are boring now. I'm just messing around- please don't be mad at me married friends. Well, Gabriel has called me twice- once, ironically while I was on the phone with Zac, and I didn't interrupt my call (I HATE CALL WAITING)- and once on Saturday while I was attempting to nap my life away. I need to return his call and tell him we will no longer be seeing each other, but I've never really had to blow off a guy before, and I feel bad. Things with Zac are good- I'm still not going to put a label on it (because usually once I start doing that things crash and burn), but we're having fun. He called me Saturday when I was a
Post a Comment
Read more
June 22, 2006 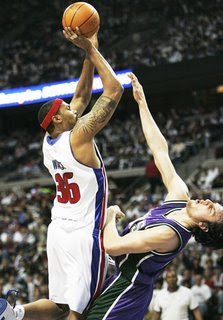 THE MANY FACES OF RASHEED WALLACE I absolutely love this picture of Rasheed staring down Alonzo Mourning. It is FABULOUS! Sheed loves throwing shoes in practice apparently. The best day of my life was probably when he took off his blouse during the game. Although most of the faces of Rasheed include him arguing, one can't help but notice what a great smile he has.
1 comment
Read more
June 21, 2006 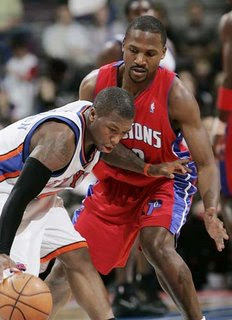 I love this picture, because douchebag mcgee actually thinks he can get past the Great Wallaces of Detroit. How hot does Rip look in that suit?! He can even juggle, folks! Sheed shows everyone how many points he just scored. He's so fine. Rasheed tells the ref. what really happened. Look at Big Ben and his reaction to the call... and look at the pure muscle on that man.
Post a Comment
Read more
June 20, 2006
So, I guess I'm officially done with Gabriel. Turns out he only wants the one thing- and I know that's a cliche, but its true. He hasn't called since this weekend, and I'm not sure he will. I'd rather he didn't, honestly... so then I won't have to tell him that I don't want to see him anymore. Anyway- I'm pretty happy with the situation with Zac, although he is Caramel's cousin. I'm fine with that, because the way he was talking this weekend when we hung out, Caramel's not coming back. That's just as well probably, because I keep imagining him surprising Zac my coming back and walking in on us kissing or something stupid like that. That would be awkward, to say the least. Zac went out of his way to ask me to call him this week... and I did last night, but I think I called him too late and he didn't answer, but I did leave a message. I spent my lunch with Andrea and Jody today, and they kept giving me crap about Zac, and s
Post a Comment
Read more
June 20, 2006 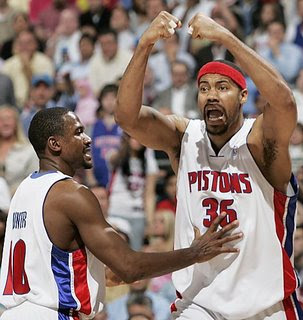 Rasheed is trying to tell the ref. that he was not twisting his elbows and it should not have been a foul. He probably got a 'T' after that. Introducing Carlos Delfino! And then there is Chauncey above celebrating after a big three. Here's Big Ben showing his muscles... and Rasheed above looking like he should be in the movie "The Ringer."
Post a Comment
Read more
June 19, 2006 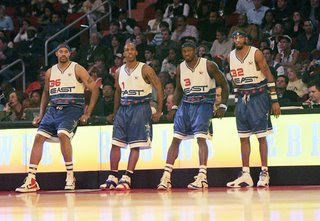 And you thought I would run out of Pistons photos to post! Yeah, right! Remember that time when the East was losing in the All-Star game, so the Coach (Flip Saunders) put all the Pistons in (except Tayshaun, cuz he got robbed) and the East ended up winning the game? Now THAT was awesome! Why do white boys even think they can play in the same league as Big Ben? Even the coach was an All-Star! Rasheed is probably talking trash to Allen Iverson, even though they're totally on the same team. Not really, but doesn't his smile look absolutely fabulous?
Post a Comment
Read more
More posts